Ulysses S. Grant was a career army officer. He attended West Point Military Academy. He fought in the Mexican-American war. During the Civil War, he was one of the few Union generals with experience under fire. In 1864, President Lincoln put him in charge of all the Union armies. Three Confederate Armies surrendered to him, including the Army of Northern Virginia commanded by Confederate General Robert E. Lee at Appomattox, effectively ending the Civil War. After the Civil War, he became General of the Armed Forces of America. He was elected to two terms as President of the United States. After he left the White House, he signed a contract with Mark Twain to publish his memoirs. Grant worked very hard to finish his memoirs before he died of throat cancer, so that his memoirs would provide an income for his family, about whom he cared very deeply. Nine days before he died in 1885, he finished writing The Personal Memoirs of U.S. Grant. His memoirs became an American classic, and are recognized by scholars as one of the best written accounts of the Civil War. Over the next few years, Julia, his wife, was paid $420,000 in royalties.

Many historians today credit Grant with being a military genius. And he was. He was a brilliant man, but inexperienced politically. He was only 46 years old when he was elected president. What he knew was the military. His two terms in the White House were dominated by widespread corruption - not his corruption - he was an honest man - but by the corruption of some of politicians and advisors around him. At the end of his second term, Grant told Congress, "Failures have been errors of judgment, not intent."

After he left the White House, he invested in his son's business venture. He encouraged others to do the same. His son, like himself, was an honest man. But his son's partner, Fernando Ward, swindled investors. Many people, including Grant, lost a great deal of money. It was then that he signed a contract with Mark Twain for the publication of his memoirs.

In 1885, many millions of people grieved at his death. In Rochester, New York, 15,000 people lined up to walk by a coffin they knew was empty, simply to pay their respects. In New York City, 60,000 people walked quietly for seven miles behind the carriage carrying his actual coffin to his gravesite, a temporary vault. The city began fund raising for a permanent tomb. It took ten years to raise the money the city wanted. A parade was held to commemorate the opening of Grant's Tomb. That year, and for many years after, Grant's Tomb was visited by more people than any other memorial in the United States.

Who was Ulysses S. Grant? 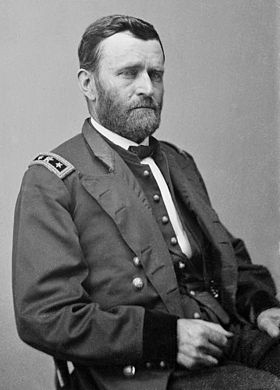